Mikisugi-sensei arranges to meet Ryuuko (via a note on Mako’s back) to caution her about her staring at him in class, lest they raise suspicions. She is free to gaze at him (and more) in private though. He tells Ryuuko about the seimeseni threads that make up the goku uniforms as well as her own kamui uniform, which is made up of 100% seimeseni threads. Only Ryuuko’s father and Satsuki’s family know of the secret of seimeseni. It is Mikisugi-sensei’s own dislike of the Kiyuuin clan that causes him to aid Ryuuko. He further reveals how he staged the meeting between Senketsu and Ryuuko at the ruins of Ryuuko’s family home. Meanwhile, Inumuta and another guy in the sewing club test a goku robe with 50% of these “Life Fibers” and the subject wearing it goes berserk.

Satsuki comes home and forces her way to where her own kamui garb named Junketsu is sealed up. Despite warnings from family staff members, Satsuki dons the living garment anyway. The following day, she’s waiting for Ryuuko as she and Mako come to school. The two have a fearsome battle with Ryuuko taking the worst of it due to the blood loss caused by Senketsu. When Satsuki reveals that wearing a skimpy outfit doesn’t embarrass her and that she’d go nude if she had to for her cause, combined with Mako’s blathering, Ryuuko realizes what it will take to bond with Senketsu as Satsuki has with Junketsu. The two battle to a minor defeat by Ryuuko says she’ll destroy Satsuki’s ambitions and aspirations. Satsuki says that if Ryuuko can defeat every club on campus, she’ll fight Ryuuko again.

To me, this episode just wasn’t quiet as good as the other two. It was fine and I enjoyed it, but it was missing something. 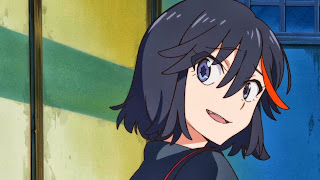 We get more plot elements with this episode, which explain the whole goku robe thing as well as the kamui uniforms. 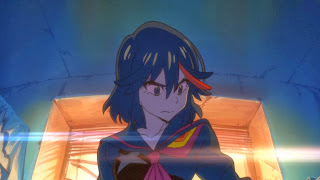 We get more about Mikisugi-sensei, and his stripping down for Ryuuko. It was funny to me last episode, but this time, I just didn’t laugh.  I felt like, “been there, done that.” Odd though, since I rather enjoy a similar running gag in Minami-ke. 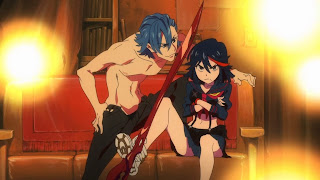 Mako’s family getting on screen time is when the series starts feeling like a tribute to Ren and Stimpy to me.  The nuttiness there didn’t make me laugh either. 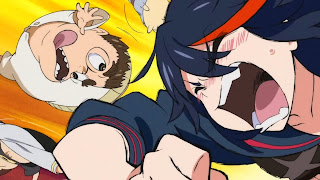 Of course, the big thing is Satsuki scoring her own kamui robe. Being an ojousama, Satsuki certainly played the role to the hilt. There’s a certain awesomeness to Satsuki’s character, which is why I rather hope she ends up not being the villain. Actually, my feelings aside, I don’t think she will be. She has her family honor to uphold as well as her role as ruler of Honnouji Academy. 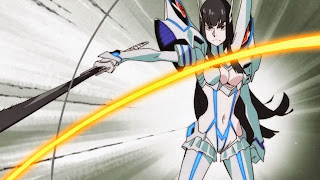 The nod to the mahou shoujo genre henshin sequences, whereby the magic girl transforms from whatever she’s wearing into her battle costume, often becoming completely nude in the process, was done here. I hate henshin sequences, and I had to suffer through two of them in this episode. No doubt, that played a role in my more negative view of the episode. 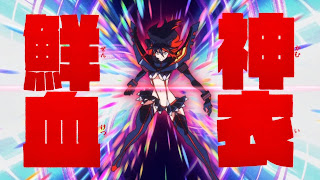 The battle between Ryuuko and Satsuki made me chuckle, namely because I was reminded of battles in Negima! where Negi and some other characters could cause similar type pressure blasts just by their mere presence. So this was obviously a node to that cliched action element. 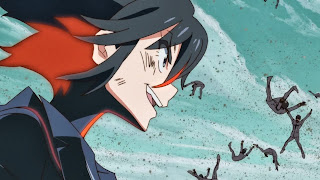 Further, because Satsuki is an ojousama and Ryuuko is the heroine rival, we have that whole cliched trope as well. I’m not complaining since I rather enjoy the heroine vs. ojousama stuff. 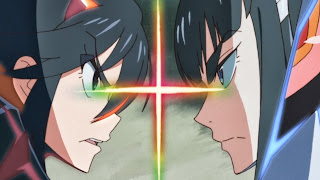 I guess next week, Ryuuko goes back to beating up and stripping opponents while taking their seimeseni threads. We’ll see what happens then. 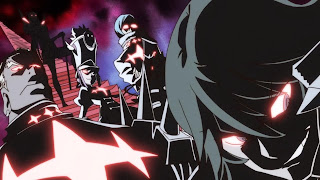