One of the the cool things about Japan is their willingness to experiment with new things and the spirit of innovation found there.  That’s what happened when a producer at Amuse, Inc. when he decided to combine idol music with heavy metal music. That innovative idea gave birth to the metal-idol trio known as BABYMETAL. 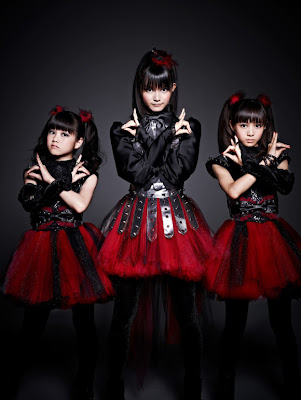 I was skeptical when I first heard about this concept. I’m not a fan of idol music, but back in the day, I listened to Metallica and the like, and thanks to Robert, I was exposed to all sorts of metal variants back in Japan. So, I thought I’d give this a shot.

I think the guys from Quiet Riot would approve. ^_~

I just love the way the idol style and music are so nicely blended with the metal music and style.  There’s no denying the girls of BABYMETAL are cute, and there’s just something kinda awesome about three, cute Japanese schoolgirls banging their heads to heavy metal. Plus, the song is just catchy to me.  “Heh-doh bang! Heh-doh bang! Heh-doh bang!” ^_^

They have a lot of other songs, which I’ll go into later.  Unfortunately, they don’t have an album out yet, thanks to the Japanese system of fleecing the otaku by putting out several versions of a CD single.  You can find them in iTunes though.