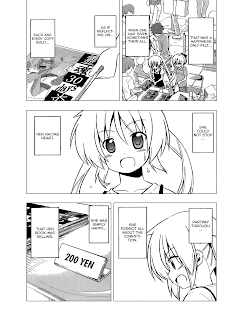 Chiharu is worried about how Ruka will make it to the doujinshi event since wearing a mascot outfit as a disguise is impractical. Kayura recalls how Isumi had a bell that would make Ruka’s identity hidden, but she also has a mask to hide Ruka’s face. As such, Nagi, Chiharu, and Kayura wait for Ruka, who shows up, reminding Nagi that whomever sells the most manga (out of 100 copies) wins the contest.

Ayumu joins the trio inside, asking where Hayate and Hina are. Chiharu says they are being held up due to traffic for the upcoming fireworks events going on that night. Nagi ponders things a bit as the event starts. Chiharu asks Kayura whom she thinks will win, but she doesn’t know. Ruka, sitting at the booth behind Nagi, gets a sale first, causing Nagi to panic a bit. Nagi’s first customer arrives in the form of Maizumi-sensei, who says it is a horribly made manga, but a good one as well. So he buys a copy. His assistant wants one, so he makes her buy her own copy, giving Nagi her second sale.

As the day progressed and Nagi made sales, she stopped thinking about the contest and simply enjoyed the thrill of selling her product, happy that people were reading it. She realized that this was what she’d been looking for the whole time.

Her last copy sold, Nagi has a tear in her eye at having made it, thanking Chiharu in the process. Chiharu quietly wonders how Ruka did in sales.

Again, we get some nice moments with Nagi. I’m really glad that Hata-sensei doesn’t allow the others to take over the focus, as could so easily happen. This is Nagi’s journey and while Ruka has her own journey, that can come later. I just love seeing Nagi accomplish something without the backing of the Sanzenin name or fortune, and Nagi feels the same way.

Nagi’s manga is described as “poorly made and hard to read” which
screams of something terrible. Yet everyone says it is a good manga.
Something that’s poorly made and hard to read is not something I want to
read. I suppose it is like the American comic strip Dilbert when it first came out, which was ugly to look at, but if you could get passed that, it was quite good.

Reading this chapter, I can’t help but now think that Nagi actually does win the contest. She may have stumbled a lot along the way, but she got there in the end and did what she set out to do — make a manga and sell that manga based on the content of that manga, not on some gimmick.

Of course, Hata-sensei could go the route of having them tie, which would still result in Hayate not having to marry Ruka and staying in Nagi’s service. Nagi still retains her character growth, but the friendship-rivalry would remain the same between Ruka and Nagi, and neither of them “lose”.

Having Ruka lose might be linked into whatever Hina, Hayate, and Kurosu are doing, allowing her to move forward as well. We’ll see.

So, another good chapter here. I kinda hope we flip back to see what’s going on with Hayate and Hina now.